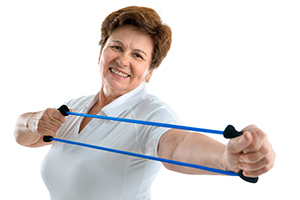 Bands can be a useful exercise tool in the elderly population

Falls remain a major problem in the elderly population. In general, falls result from poor balance and a fear of walking, and they can lead to injuries—like hip fractures and traumatic brain injuries—or possibly death in extreme circumstances. Fear of walking can also lead to reduced physical activity in older adults, which may, in turn, create a vicious cycle of more fear and less physical activity. The risk of falling increases with older age, which is why it's important to develop strategies that will reduce this risk. Exercise programs are commonly used to address this problem since they are capable of increasing strength and improving balance and flexibility. Elastic bands, in particular, are one tool that can be very helpful in these exercise programs for the elderly. These bands are portable, inexpensive and easy to use, and may, therefore, be ideal for improving strength and reducing the risk for falls in older adults. For this reason, a study was conducted to determine if elastic bands could improve balance and other physical features in order to lower the fall risk in the elderly population.

Results showed that both groups improved in all measurements taken, but the experimental group reported greater overall changes than the control group. This was found to be the case in scores for balance, flexibility, fear of falling and gait ability, which rated how well each participant walked. These findings show that while physical therapy is independently capable of improving physical features related to falling in older individuals, the addition of elastic band exercises may lead to even greater improvements. Perhaps most important of all, adding these exercises may also reduce the fear of falling in the elderly, which is a major contributing factor to falls. Based on these results, it appears that a physical therapy program that includes elastic band exercises can lead to several benefits and reduce the risk of falls in the elderly population. Using this type of program can, therefore, help to build confidence in older adults and may in time lower the overall rate of falls.

The information in the articles, posts, and newsfeed is intended for informational and educational purposes only and in no way should be taken to be the provision or practice of physical therapy, medical, or professional healthcare advice or services. The information should not be considered complete or exhaustive and should not be used for diagnostic or treatment purposes without first consulting with your physical therapist, occupational therapist, physician or other healthcare provider. The owners of this website accept no responsibility for the misuse of information contained within this website.